I've taken a few minutes to post the video clip from Alibaba's recent, 2/1/18 investor call for your review.  As always, the Q&A was really entertaining......Alibaba is an amazing, fascinating business and...... Oh Crap!.....

Anyway, I see that there's no video of the call available, so I've posted links to the usual materials they have actually provided to investors, in lieu of anything relevant, below.

Unfortunately, I had scheduled a conflicting dental appointment, thinking it would be less painful than the investor call, so I missed the live session.  But from the filings and the recording, I must say, I'm really proud of "My analyst friends".  They've stepped up.  Although it's just an initial attempt at objectivity, the enthusiastic, congratulatory tone which was omnipresent in prior calls, was gone.  For the first time ever, they, as a group, seemed to have taken my advice and turned their attention to the more relevant aspects of the presentation, largely ignoring the "fluff".  We have a long way to go, but we're on the right track.  Baby steps.

The analysts who asked questions on the call, Eddie (Merrill), Alicia (Citi), Alex (JPM), Piyush (GS), Youssef (Suntrust), Grace (Morgan), Greg (Barclay's)  seem to have taken my advice (A Helping Hand.....) to heart.  Even though Alibaba Management has saddled us with the same old, incomplete schedules, funny numbers and nonsensical, opaque inter-company relationship discussions, the analysts' simple, straight-forward questions got right to the heart of the matter.  I feel like a proud Papa!  Go get 'em kids!

One of my readers put it best in a recent comment:

As a younger professional in finance (<35), I recently finished re-reading on of my favorite books, The Smartest Guys in the Room. In what I can only describe as serendipitous, I stumbled across your blog a few weeks ago.
- Opaque financial statements: check
- Massive use of SPE's/SPV's in offshore jurisdictions: check
- All major financial institutions turning a blind research eye because the I-banking proceeds are too lucrative: check
- Regulators and rating agencies content to take the company at its word: check
- Management creating new "metrics" by which the company should be valued and success measured: check
- Anyone who asks tough questions "just doesn't get it" and lacks the intellectual purity to see what the company visionaries are creating: check
I read your analysis on BABA and on so many different levels this screams "Enron 2.0". The similarities are uncanny. But it's actually worse than that. It's Enron on steroids due to the fact that the Chinese government and regulatory bodies are likely aware of, and support the companies shenanigans, both implicitly and explicitly. If BABA is able to fleece American investors for billions of dollars in exchange for what will ultimately be worthless (or near worthless) equity, all the better. The average analyst/fund manager on Wall St. is likely too young to remember Enron as it happened in real time; even fewer of the older professionals who do remember could explain in depth how the company manufactured their financials and the machinations involved. Once again, history seems doomed to rhyme, if not repeat.

So here are the metrics we've been discussing since the IPO, as described in the 12/31/17 materials/filings.

1.) Fake Revenue: Incredible 56% revenue growth last quarter.  Most of this growth is likely just "fake" consolidation revenue masquerading as "organic" growth. (i.e. If Ebay bought Macy's and consolidated same, Ebay's revenue would jump 400% YOY in the consolidation quarter.)   That's probably what's going on here (Intime, Cainiao, SunArt, Hema, Lazada, etc.).  The "New Retail" model that management has been referring to (buying up brick and mortar) would have a much lower gross margin, and consequently, a much lower Price/Revenue ratio.  Management has also, yet again, increased their "guidance".  It's presumably much easier to forecast growth when you can go out and "buy" it.  Unfortunately, since Revenue is, and has always been, reported as one big "Blob" we have no idea what it's comprised of.  (i.e. "Organic" e-Commerce vs. "Purchased" Brick & Mortar Revenue)

2.) "Questionable Assets": (Investment Securities, Goodwill, Intangibles, Land Use Rights and Investments in "Investees") are now a whopping US$56 Billion (51% of the balance sheet), up $9 Billion from $47 Billion in the prior quarter.....compared to roughly US$0.00 (0.00%) prior to the IPO just four short years ago.  Alibaba Management continues to create financial vapor at an unprecedented pace.

3.) "Questionable Assets" - Valuation:  I've long opined that IFRS accounting rules had required Alibaba Management to write down their interest in Alibaba Pictures and Alibaba Health by roughly $3.5 Billion because the publicly traded value simply didn't support their carrying value. (See: Finding Inner Peace in Dharamsala .....and thoughts on the Alibaba 20-F....  )  Good news! ....this quarter they've finally written off $2.8 Billion on Alibaba Pictures!.  We're making progress!......Oh....but wait....when they consolidated the money-losing-dog-turd Cainaio "junk delivery by tuk-tuks & scooters ecosystem" business, they somehow reported a $3.45 Billion gain on the consolidation....more than fully offsetting the Alibaba Pictures write-down!  The really impressive thing about this transaction is that management was compelled to skip over any of the confusing, yet presumably painful calculations and disclosures relating to the gain.  Again, this transaction was disclosed (buried) as one big "Blob".  I'm sure this math is just too complex for us mere mortals to understand.  Moreover, even though Cainaio has been losing $40 Million (or much more) per quarter, like clockwork, for as long as they have been disclosing/reporting profits/losses, there is no discussion of carrying value of this newly consolidated asset.  We can presume it's significantly higher than the $3.45 Billion gain booked on the quarter.  They are accounting wizards!

4.) No New Customers: Annual Active Consumers (AAC) increased to 515 million, a 6% increase QoQ and a 16% increase YoY.  When we compare this slower (more believable) AAC growth to the massive (less believable) revenue growth (56% YoY) we wonder how is this even remotely possible?

5.) More Overhead: Alibaba brought on an additional 4,237 employees in the quarter (Primarily related to the consolidation of Cainaio).  The footnote was almost identical to last quarter's footnote, except it was 7,205 additional employees due to the consolidation of InTime last quarter.  Wouldn't it be nice to have at least some disclosure as to how these two, brand new consolidated businesses are doing?  Proforma P&L's and Balance Sheets would be appropriate.

6.) Share Based Compensation (SBC): Alibaba issued and incredible $786 Million (6% of "goosed" Revenue) of SBC in the quarter. ($2.1 Billion YTD)  I don't know of any other "mature" business, in the history of finance, that's even come close to giving away that much equity in the form of SBC.

7.) Significant Cost Increases:  Overhead (Including SBC) increased from 61% of Revenue last year to to 69% of Revenue this year (pg. 11 of the press release).   In absolute terms this is a $3.7 Billion increase over the same quarter last year.  Youseff Squali (Sunrust-Robinson-Humphrey) asked a wonderfully simple, insightful question in minute 48:00 of the Call.  He asked about the forecast for organic growth versus "acquired growth" and the resulting compression in margins.  Of course, what he was getting at was the "if Ebay acquired Macy's" phenomenon described above.  Maggie's paraphrased response that "Our revenue growth is way up.  What would you rather have?  60% of an apple?...or 40% of a watermelon?" Though interesting, thought provoking and entertaining, Maggie's response failed to answer Youseff's question.

8.) Professional Standards:  Finally, in an, I'm sure, unrelated matter, PWC, Alibaba's auditor, seems to be setting new records for regulatory fines every couple of months.  PWC was also recently banned, for two years, from auditing publicly listed companies in India, allegedly for failing to detect a massive fraud.  Of course, PWC is appealing the ruling, arguing, under the legal theory of "complicitus moronius" that they did nothing wrong.  I'd imagine that this is just another in a long string of horrible coincidences for PWC. I'm sure everything is just fine at Alibaba.

Here is an interesting comment from the press release:

Tmall recorded 43% year-over-year growth in physical goods GMV during the quarter, reflecting robust growth across all major categories including apparel and accessories, consumer electronics (mobile phones) and FMCG.  Tmall continues to be the platform of choice for the world’s top brands, with Givenchy, Giorgio Armani Beauty and Volvo establishing Tmall flagship stores and Longines, Hennessy, Dom Perignon and Baccarat joining our Luxury Pavilion in this quarter.

My first thought was that it would have been nice to see what the actual sales dollars (GMV) were for these brands.  It would have taken only a few minutes to list these presumably huge sales figures right next to the brand name.  I'm sure the sales are impressive.  But as usual, Alibaba management saw no need to brag about their success.

My second thought was to take a peek at TMall and see what types products these luxury brands were selling. (2,157 items came up for Givenchy alone).  Many were $40-$100 items with Givenchy logos emblazoned on them (lipstick, t-shirts, cologne and jewelry).  I also took a few minutes to check out the primary "Flagship Stores" selling Givenchy products on TMall.  Below are screen shots for three (3) or the more prevalent Givenchy "Flagship Stores", (Para, Lynx and Peacock Plume) 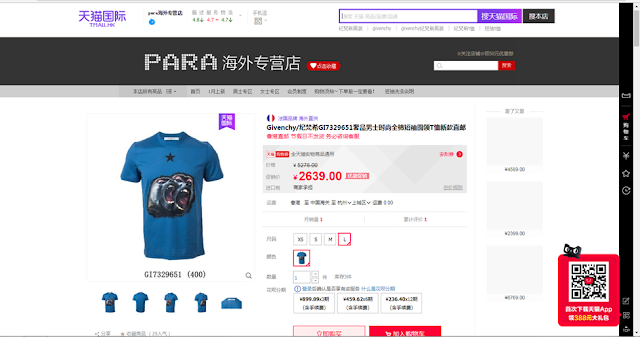 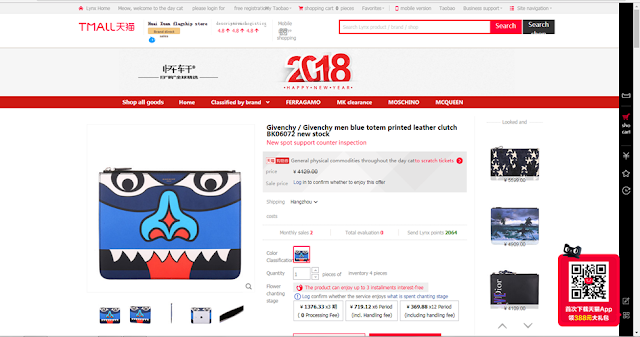 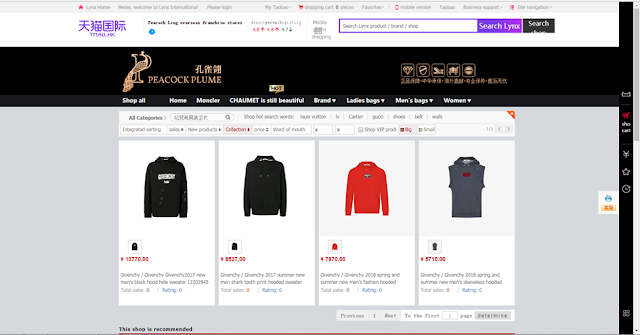 Interestingly, the products and descriptions available on the TMall "Flagship Stores" didn't look very much like those on Givenchy.com   I suspect, as usual, things are different in China.  In an attempt to get to the bottom of this, I've emailed Givenchy asking them to comment on whether Para, Lynx and Peacock Plume stores are actually authorized Givenchy distributors.  They said they'd get back to me in five (5) business days.  I'll let you know what I find out.

So there you have it, the more things change, the more they stay the same.  I really miss Ken, Jeff and Andy.....they were really fun to watch, but Jack, Joe, Maggie and Daniel are doing their best to fill their shoes.

Finally, let's discuss the "Shiny-Ball Acquisition" of 33% of Ant Financial.  There's a lot here, and I'll be working my way through the 86 page, virtually unreadable filing when I get some time this week, but after an hour or so of struggling with this, here are my initial thoughts/bullet points: 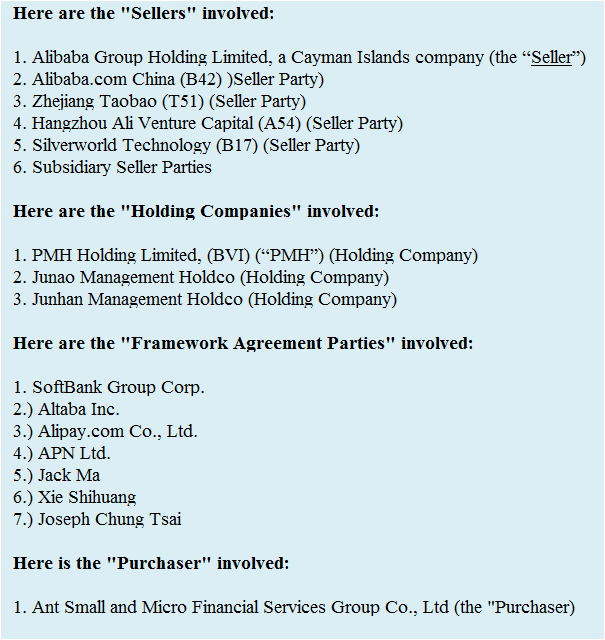 As I mentioned, I'll be reading through this agreement over the next week or so.  At some point, we should all be able to figure out exactly what it says and means. My guess is, that this is just another accounting shenanigan that management is using to lever-up, create "fake" Enron-esque asset values and book related valuation gains.  Stay tuned.