....paradise on earth....here's the view of the Himalayas from our hotel room balcony....spectacular. 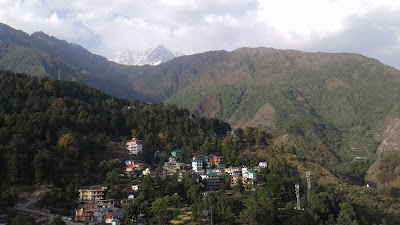 The occasional monkey assault on our luggage was a little irritating (Travelers Tip: Don't leave your hotel balcony door open unless you don't mind a room full of monkeys.  Who would have known that the ninth floor was monkey accessible?.....this wasn't mentioned on Trip Advisor...just sayin'...)

Anyway, Dharamsala is the epicenter of the most beautiful, mostly-unspoiled, Himalayan wilderness and natural beauty you can imagine.  The people are wonderful and the air is, in the words of the great philosopher and part time con artist, Masayoshi Son, generally "filled with happiness".  With the exception of occasional, white-knuckle taxi rides on hairpin, one lane, cliff side roads, dodging cows, sheep, pedestrians, tuk-tuks and every type of vehicle immaginable, we're experiencing the history, beauty and serenity of Dharamsala in all of its subtle, peaceful splendor. We enjoyed a wonderful hike to Triund hill  earlier today, about 9,000 feet in elevation.  You can see Triund in the photo above, it's at the tippy-top of the ridge just below the snow capped peak  The only time I'm ever at that altitude someone is usually telling me to secure my tray table under the threat of federal prison.  Anyway, Triund is a beautiful, spiritual place where we pondered the meaning of our existence, why we are here ...and whether the Cavs can repeat as NBA Champs.  (We get ESPNABC/TNT at the hotel but the games are on before breakfast....and my wife requests that I don't "yell at the TV" so early in the morning, as the Buddhist Monks might find it unsettling.)

If all goes according to plan, we will have the chance to meet with the Dalai Lama soon.  I've been corresponding with his office trying to request an audience and we've been told that we may be able to swing by in the near future.  His office is aware of this blog and my take on the oddities of China's financial shenanigans.   As you might suspect, I'm highly interested in his take on whole mess. With any luck, I'll be able to use my Dick Fuld Banker Speak Translator to interpret what his holiness is really saying.  There is, of course, the chance, if we're able to speak with HHDL (His Holiness Dalai Lama) that we'll be forever banned from the Chinese mainland, like Lady Gaga, but being the risk seekers that we are, we're more than willing to take that chance.    Stay tuned.

If you are, like most folks, a little sketchy on Tibetan history, its exiled government in Dharamsala, Tibet's relationship with China and particularly the role of the Dalai Lama in same, I can highly recommend this very well done, informational and entertaining HBO/Youtube video (complete with a Dalai Lama interview in Dharamsala) from that renowned religious historian, John Oliver.  Personally, if I were John, I would have left out the references to Willem Dafoe's genitals, as an unnecessary tangential diversion, but that's just me.  As a humble blogger who can certainly appreciate both HHDL's and John's message and point of view, really, who am I to judge?

In any case, since we're in India right now and and wi-fi access can be a bit unpredictable, I'm fearful that I'll be off the grid next week when Alibaba releases its always entertaining and hilarious year end financial statements.

In the spirit of truth and enlightenment that I hope to achieve here in Dharamsala, I'm compelled to pre-announce what I believe will be the framework of Alibaba's Investor Call, Press Release and the Financial Statements.

Here's what Alibaba Management is going to say....

There's really no magic here.  I'm not a prophet or soothsayer.  When you are just "makin' shit up", as we say in the accounting trade, it's relatively easy to hit your numbers, consequently making the fake numbers released, even more predictable.

GMV - I've long maintained that the GMV figures (which Alibaba now only publishes annually) are fiction.  My guess is that they will announce a 30% YOY increase, coming in at just under 4.1 Trillion RMB or about US$600 Billion.   (Last years GMV was 3.092 Trillion RMB or US$485 Billion).  Interestingly, according to the NBS, total on-line sales of physical goods for all businesses in China totaled 4.4 Trillion RMB during the same period.  Alibaba GMV, according to their fake numbers, will now account for roughly 95% of all merchandise sold on-line in China over the same period.  Note that JD.com, VIPshop, 58.com and virtually every US listed Chinese e-tailer have published (and continue to publish) GMV figures which, in aggregate, exceed the total on-line sales of physical goods in China by an ever-increasing differential.  This is, of course, ridiculous.

Revenue - Revenue, based on prior pie-in-the-sky guidance, should come in somewhere around 152 Billion RMB (US$22 Billion).  Prior year Revenue was 101 Billion RMB, or US$15.7 Billion.  Of course, unlike every other publicly traded company, there will continue to be no detailed breakdown as to how this revenue is generated.  The bulk of this incredible growth continues to be reported as one big "blob" of "China Marketplace, misrepresented as organic growth when in all actuality, it's "purchased" revenue from the spate of nonsensical, money-sucking acquisitions since the IPO.

Of course Net Income and Profit Margins should continue to bounce between "Unpredictably Huge" and "Amazingly-Bigly-Tremendous".  There really is no discernible relationship between operating metrics, transaction volume and Net Income.  Net Income, as in past years/quarters, will be completely dependent on the write-ups and increased valuations of their "Investments in Investees". Daniel and Maggie will produce some silly schedule describing the incredible valuation increases (and their share of same) with commensurate "Gains on Deemed Disposals" where applicable, for Alibaba Health, Alibaba Pictures, Ant Financial, Cainiao Network, Weibo, Koubei, InTime, Lozada, et al.  As in the past, these surprise valuations will be calculated, verified and meticulously documented by Bloomberg press releases.  This makes perfect sense.  Why bother issuing financial statements and real metrics for these consolidated boondoggles, when you can get away with issuing an unverified press release?

Questionable Assets -  I fully expect "Questionable Assets" (Investment Securities, Investments in Equity Investees, Land Use Rights, Intangible Assets and Goodwill) to come close to 75% of the Balance Sheet, topping out at roughly $47 Billion.  These money-sucking "Assets", which will have to be written down or off at some point were only 40% of the Balance Sheet at $10.5 Billion on June 30th, 2014, prior to the IPO.  The relentless conversion of cash to financial vapor has and will continue at an alarming pace.

Share Based Compensation -  Alibaba employees, affiliate employees, family members, political cronies and Caribbean Shell companies will have received another roughly $2.5 Billion + in real SBC, about 12% of fake revenue, in the last year. Maggie, Joe or Daniel will, of course, make some silly statement explaining how this isn't actually "dilutive" and is truly necessary to retain all of the talent required to grow their "ecosystem", during the Investor Call.

Finally, you'd think that with metrics like this, there would be a feeding frenzy of investors swarming to snap up Alibaba stock.  Let's take a look at the average daily volume for March & April, the two months leading up to the year end financial statement release, since the IPO.

Interestingly, rather than a feeding frenzy, the exact opposite seems to be happening. Volume is declining substantially, to about half of what it was two years ago during the same period.  Even more interesting is that the stock price continues to increase on rapidly declining volume.

I've pondered this phenomenon before in prior posts.  One possibility is that investors are holding this stock, are extremely bullish and in it for the long haul, effectively reducing active float/volume.

The other, more probable explanation of the volume decrease is that the smart/big money has abandoned this trade long ago.  What we're most likely seeing is pie-in-the-sky retail optimists trading with Chinese Government sponsored Caribbean Shell Companies.  These shells are apparently charged with the responsibility of, and sufficiently funded, to support the stock price and collateral value of these shares.

Also note that the short Interest in Alibaba has now declined to 13% of float. Presumably, shares have been gobbled up to cover. Let the squeeze begin!.  To put that in perspective Tesla's short ratio to float bumps around at 25%.  Amazon's has declined to 1% over the years, destroying the shorts, as they've proven that unfettered expansion coupled with losing money over the long haul is indeed a sustainable business model.

So as investors, we must ask ourselves, is the Alibaba valuation more like Tesla or Amazon?....or perhaps Valeant?  I guess we'll see....

Will Alibaba management once again come through and hit their (fake) GMV, Revenue, "Questionable Asset" Levels and SBC Target as I've suggested?  Is it possible they actually blow by these Targets and report something really amazing?  We all know that nothing bad ever happens on the Mainland.  Everything is sunshine, lollipops and rainbows.  Honesty and integrity are the mainstay of China's political and financial systems....ask any Tibetan what they think about the integrity of the Chinese leadership and you'll get an earfull....at least from those who have chosen not to self-immolate, sticking it out in exile.

Finally, based on the above, as well as my analysis of every quarterly Investor call since the IPO (links below), I'm revising my long term price target on Alibaba from $7/share down to $6/share.

Hope to hear from you once I'm back in the States....

Chinese Hardliners have "parts of their brains missing"
https://www.yahoo.com/news/dalai-lama-says-chinese-hardliners-parts-brain-missing-104711121.html?soc_src=social-sh&soc_trk=tw

Posted by Deep Throat at 2:55 PM No comments: