"Just when I think you couldn't possibly be any dumber, you go and do something like this...
....and TOTALLY REDEEM YOURSELF!"
Harry Dunne - World Renowned Economist - circa 1994

Well, I spent an hour of my life (that I'll never get back) listening to the Alibaba Investor Call this morning. I also went through the Press Release, Presentation and filing (links below) and I must say, Joe, Maggie and Daniel never cease to amaze.  Just when I think the numbers couldn't possibly get any dumber.....well....you know the rest....

Here are the links:

Link to Prior Quarter(s) Analysis:

You are probably wondering how I can possibly analyze all of these figures and send out my analysis during the Investor Call. (Note the time stamp on the email blast.....the Investor call wrapped up by 8:30 AM US EST) You might be thinking that I have some sort of crystal ball or I'm privy to insider information.....Quite the opposite actually.  I don't have a mole.  I just know exactly what Alibaba Management is going to say, therefore I know exactly what I'm going to write.  As the Rodeo Cowboy once quipped, "I've ridden this bull before".

I wrote most of this post over the last few days, I just had to wait for the press release to fill in the details.  i.e.) Did fake revenue and GMV increase 29% or 32% during the quarter? Was share based compensation 10% or 12% of fake revenue?  What level of genius did management rise to?  Did they pull off another "Gain on the Deemed Disposition of Fake Assets"?  Would it be US$ 2 Billion? .....maybe even US$ 3 Billion?  Everything they touch turns to gold!  The suspense, as always, is mind-numbing.  So you can see, in a veiled effort to maintain my journalistic objectivity it's only prudent, polite and a professional courtesy for me to withhold my analysis at least until Alibaba Management finishes presenting their fake numbers before I analyze them.....it's really the very least I can do.

Here are the Bullet Points for today's buffoonery:


1.) Astounding Revenue Growth (55% year over year for the quarter ended). No other (real) large business or economy on the planet is experiencing this type of growth. Businesses all over the world are generally treading water right now, looking for direction and sanctuary. Global growth, even though supported by extraordinary levels of Central Bank stimulus can best be described as stagnant, yet Alibaba's reported growth story is somehow immune to macro-economic factors.

2.) Oddly, Alibaba's signature fake metric, GMV growth, was not presented or discussed, at least that I could see, in any of the disclosures (Other than Daniel's cryptic response to the second last question of the Investor Call that GMV "Looks good and is on track") If we have some fun with ratios, we can extrapolate that Alibaba's GMV this year, with a "conservative" 24% annual growth rate will be just short of US$ 600 Billion (Using last quarter's slowing 24% GMV growth rate applied to the 3/31/16 YE numbers). This extrapolated number now becomes 125% of Walmart's annual sales. Note that according to China's National Bureau of Statistics (NBS) data, Alibaba projected Quarterly GMV of roughly $150 Billion is now greater than ALL ECOMMERCE SALES OF PHYSICAL GOODS IN CHINA (US$146 Billion during the same quarter). As an aside, GMV reported by all US listed ADR's is now about twice the NBS total eCommerce figure. (If these ADR's and the Chinese government are going to publish ridiculous figures like this you'd think they'd at least get together and compare notes.) If Alibaba's projected GMV were GDP, Alibaba would now be the 34th largest Economy on the planet, right behind the United Arab Emirates. They've somehow accomplished this economic miracle with a few thousand employees, a few computers and an "ecosystem" of undisclosed, odd partnerships that somehow get these goods from point A to point B. Joe Tsai describes "two million" off-the-books "associates" involved in the Alibaba eCommerce effort, without describing (or apparently knowing) how this "ecosystem" works or how these people get paid. Truly amazing.


3.) Share-Based Compensation (Stock Grants & Options) increased from US$556 Million to US$637 million for the quarter, and continues through the roof at 12% of FQR (i.e. Fake Quarterly Revenue ). Since FQR increased 55% this naturally drives the SBC ratio lower. Math is a wonderful thing. 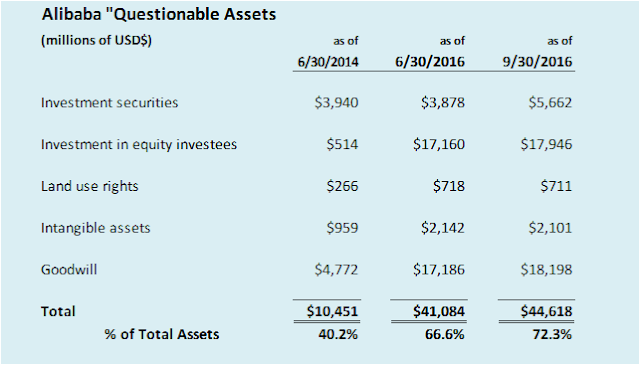 As an aside, did they really convert another US$ 3.5 Billion in cash to financial vapor in just three months? Again, there is no discussion re: the details/components of this gigantic write up/purchase in the Investor Call, Press Release, Presentation or filing. They've increased these same "Questionable Assets" a whopping $33 Billion in just over two years (since the IPO), fueled primarily by increased bank debt, bond issues and the IPO money. How is this even possible? At some point, these investments (aka boondoggles) will have to be written down/off. This is indeed another milestone quarter for Alibaba. "Questionable Assets" exceed Shareholder Equity by US$ 1.2 Billion now. If I'm indeed directionally correct about the "real" value of all of this intangible fluff, unless the Chinese banks step in with a bail-out, Alibaba is un-officially just a good flush or two away from swirling down the financial commode as I type.

5.) For the second time in history (Q1 and this Quarter) the Group has reported selected Segment data. (pg 21 of the Press release). All of the acquisitions generally since the IPO, described as Cloud Computing, Digital Media & Entertainment and Innovation Initiatives (plus unallocated expenses) contributed operating losses of US$ 977 million. BABA's share of losses for its' "Equity Investees" (Koubei, Youku Tudou, Cainiao, et al.) came in at US$ 85 Million. (pg 13 of the Press Release) From a purely cash flow perspective, these businesses are providing about as much utility as a leaf covered dog turd on a crisp fall day.

6.) Costs are skyrocketing. Quarterly Expenses excluding Share Based Compensation (SBC) increased by US$1.25 Billion on an absolute basis, or an additional 4% of Revenue YOY.

7.) Borrowing has also, of course, increased significantly in the quarter. Liabilities are up by US$ 2.4 Billion, of which US$ 1.2 Billion is Bank borrowing.

8.) Again, there is no detail provided for the required Alipay/Ant Financial profit sharing accrual and "processing fee" offset. (Remember, Alibaba "nationalized" (stole) this business away from Yahoo! and Softbank in 2011) Presumably, since there is no discussion of the net profit-sharing amount, it stands to reason that there must continue to be no significant profits in Alipay/Ant. Perhaps they have adopted the Lending Club (NYSE:LC) model. (i.e.) Make under-priced loans to un-bankable businesses and hope for the best. It might look good for a while, but as we learn repeatedly, it's hardly sustainable.

9.) Finally, in my mind the most important figure, the FNI (Fake Net Income) decreased Q over Q from US$ 3.4 Billion in 2015 to US$ 1.1 Billion in the quarter just ended (pg. 26 of the Press Release). It's actually relatively flat after the elimination of the absurd prior year US$ 3 Billion "Gain on deemed disposals/disposals/ revaluation of investments and others"(Authors note: That description still cracks me up whenever I read it. You just can't make this stuff up.) This Net Income number (albeit fake) is shockingly small for a business which purportedly has cornered the e-Commerce market in China, shares profits with the preferred payment method of every Chinese Consumer (900 million registered Alipay users) and holds estimates of up to US$ 200 Billion of the Hard-Working-Chinese People's money in related, off the books investment funds. Moreover, Alibaba's demonstrated, unquenchable thirst for cash is far from typical of a business that, by Alibaba's own account has a virtual monopoly on eCommerce, and all that is on-line in the "World's Second Biggest Economy".  Jim Chanos likes to point out that in the last year Alibaba has consumed more capital than Amazon.com has required in the last twenty years.  Why do they need all of this capital? Chanos's theory is that they are funding operating/capital losses at all of these "off the books", related, ecosystem businesses.  With Alibaba's reported market dominance, one would think that Alibaba treasury personnel should be driving to the bank daily with dump trucks full of cash to deposit, rather than scouring the globe for more sucker capital lurking under any remote off-shore rock they are fortunate enough to overturn.

10.) Acquisitions and funding rounds continue unabated. (Not Discussed)  The $1 billion raise for Koubei and $1.4 billion raise for ZTO, are both Potemkins for Alibaba.  These are just two more businesses capable of generating huge write-ups and "gains on deemed disposal".   Contrary to management's demonstrated philosophy, raising capital is not an acceptable surrogate for real profit, earnings and economic value, yet this has been Alibaba's game plan from day one.

11.) There is, of course, only a passing mention of the ongoing SEC Investigation, even though there is a possibility that there is a whistle-blower involved has been reported. Oddly, this makes perfect sense.  Alibaba certainly wouldn't disclose investigation details in a public forum.  "Hey, our whole business is an accounting scheme, but we're delivering real investor value anyway!".  Mary Jo White won't say anything since it would be tantamount to admitting the SEC is, well, to be kind, incompetent at best.  "Oooppsss......we totally missed the biggest accounting fraud in history....our bad.....Sorry!"

If you are a regular reader of this blog and you think that this post looks oddly familiar, you are spot on.  Just like Alibaba's fake numbers, I copied the language almost verbatim from my Review of the 1st Quarter 2016 (June 30th QE) numbers posted August 11th, 2016. Why reinvent the wheel when nothing has changed?

The silly scheme continues....and the made-up details of the mis-rep get more entertaining by the quarter.  I'm really looking forward to the "Singles Day" figure.....another 40% increase would put them over US$ 20 Billion for the day.....about the same revenue as Alcoa Aluminum for the year.  Of course, It would take real guts to publish a fake number anywhere near that.....but I'd bet they'll come close.