I was on a fishing charter in the middle of Lake Erie while Alibaba Management was conducting their always entertaining, quarterly earnings call last week.  After listening to the archived Recording and scanning through the 6-K, Presentation and Press Release (links below) , based on the ridiculous content, I have to say.....I'm glad I went fishing. 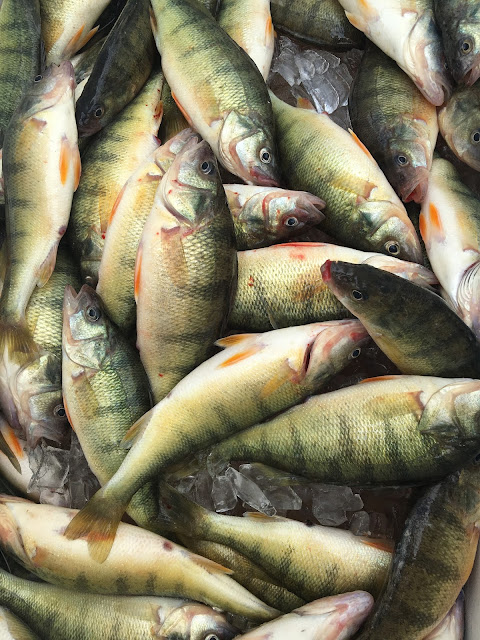 Rather than rehash the details, most of the nitty-gritty of Alibaba's financial prestidigitation is discussed in my June 23rd, 20-F analysis.  If I were to describe the most recent earnings release in one sentence, I'd say that Jack, Joe, Maggie, Daniel and company have chosen to double down on their (alleged) "pants-on-fire" misrepresentations.  The whole thing is getting more preposterous by the quarter.

Here are a few of the less-than-believable metrics we've been discussing since the IPO:

1.) Fake Revenue: Incredible 56% revenue growth last quarter.  If we do a little math (based on ratios described in the 20-F just a couple of months ago) we can extrapolate that, according to their numbers, Alibaba now sells nearly all of the On-Line, Retail, Consumer Physical Goods in China. When we compare Alibaba's GMV figures to China's National Bureau of Statistics (The Chinese counterpart of the US Bureau of Economic Analysis), Alibaba handled roughly US$176 Billion of GMV, or 92% of all of China's On-line Retail Consumer Physical Goods, in its "ecosystem" in the quarter. The most astounding aspect of this odd math, is that the NBS reports that On-Line sales in the quarter grew at "only" 28.6% (Clothing, Alibaba's presumed meal ticket was only 20.8%).  Alibaba's reported 56% Revenue Growth would seem implausible (since they are effectively the entire On-Line Economy in China now...) unless they have somehow nearly doubled the revenue associated with each On-Line transaction in the last couple of months since the 20-F......which would also seem to contradict the law of large numbers.

How can they accomplish this magic?  Remember, from the SEC Correspondence file, Alibaba's GMV sales do not actually have to be closed on the platform......they just need to be somehow "reported as closed". This accounting magic explains the plethora of luxury knock-offs (Gucci, Prada, Coach, Ralph Lauren, Rolex, Cartier, etc.), yachts, vehicles, industrial goods (pipe, steel, fuel oil, etc.)  bad loans, real estate, commercial paper, etc. all available for purchase in the Alibaba "ecosystem". Go ahead, search for some of these things on Taobao and TMall....it's a hoot. Needless to say, shoppers don't actually plunk down their Alipay card to purchase yachts and foreclosed buildings on-line, but Alibaba management apparently has the world convinced that they do. They want us to believe that the lion's share of GMV is comprised of FMCG (Fast Moving Consumer Goods) when in reality GMV is now mostly SMFG (Slow Moving Fake Goods).

3.) "Questionable Assets" - Valuation: We already know that roughly US$3.5 Billion (more than half of last fiscal year's earnings) of these assets; Alibaba Pictures (US$2.1 Billion) and Alibaba Health (US$1.4 Billion); should be immediately written off if Alibaba Management were actually following GAAP and marking-to-market as described in my last post, Finding Inner Peace in Dharamsala .....and thoughts on the Alibaba 20-F....   Based on these "in your face" accounting shenanigans alone, it would be difficult to believe that the remaining US$40 Billion isn't significantly goosed as well.  Since none of these "Investees" seem to be generating actual earnings, the probability that these carrying values reflect economic reality is approaching zero.

4.) No New Customers: Annual Active Consumers (AAC) increased to 466 million, a 3% increase QoQ and a 7% increase YoY.  When we compare this slower (more believable) AAC growth to the massive (less believable) revenue growth (56% YoY) we wonder how is this even remotely possible?  Did the same customers suddenly all decide to purchase 1.5x what they had been doing last year?  Again, the law of large numbers tells us that AAC growth simply doesn't track with revenue and extrapolated GMV.

5.) No Turn Around : We continue to see that Koubei, Cainiao and the other "Investees" continue to lose US$200 Million a quarter, like clockwork (pg. 16 of the Press Release).

6.) More Overhead: Alibaba brought on an additional 7,205 employees in the quarter (Primarily related to the consolidation of InTime).

7.) Unbelievable Cost Cutting!: Even after adding all of these employees, and incurring all of the newly acquired overhead and losses, Costs & Expenses decreased from 75% of revenue in the March 2017 Quarter to 65% in the June Quarter.  (Pg. 12 of the Press Release)  A skeptic could conclude, because of the 660+ related companies in Alibaba ecosystem, that there's a good chance that not all of the company's distribution and transaction costs are accurately reflected in the income statement.

8.) Professional Standards:  Finally, in an, I'm sure, unrelated matter, PWC, Alibaba's auditor, seems to be setting new records for regulatory fines every couple of months.  They were fined US$6.6 Million (RSM Tenon Group Plc) a few weeks ago and US$6 Million (Connaught Plc audit) in May, 2017 for, generally, "falling short of professional standards".  Apparently, looking the other way when your crooked client tells you to do so, falls a tad short of meeting "professional standards". I'd imagine that this is just a horrible coincidence. I'm sure everything is just fine at Alibaba.

And the result of all of the above? 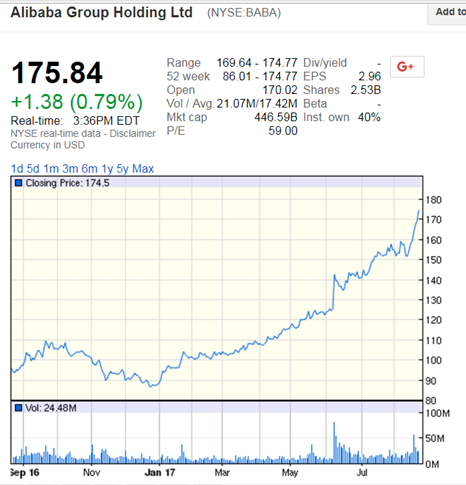 The valuation is astounding. When we compare Alibaba's valuation metrics to other large, high-flying tech stocks, Alibaba is about as pricey as they get.

Alibaba sports a valuation of $19.90 of Market Cap for every dollar of Tangible Book Value (Book Value net of Goodwill and Intangibles).  The ratio is 2x to 4x the ratios of Apple, Alphabet or Tesla. The only business with a higher valuation based on this metric is Amazon at $27:1.


Moreover, Alibaba's P/E ratio is 59......the company is valued at just shy of 60 years of current (allegedly fake) earnings.  As I've mentioned above, if the nonsensical carrying values of the Questionable Assets were written off/down, the ratio would more likely approach Amazon/Tesla territory.

For your pleasure.......here are a couple of my other favorite stock charts..... 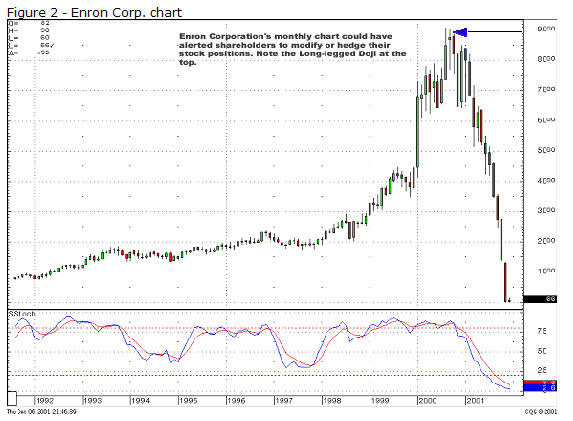 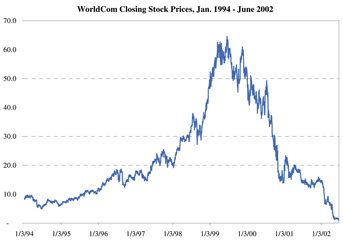 Aren't those roller coasters amazing?  What a ride...... 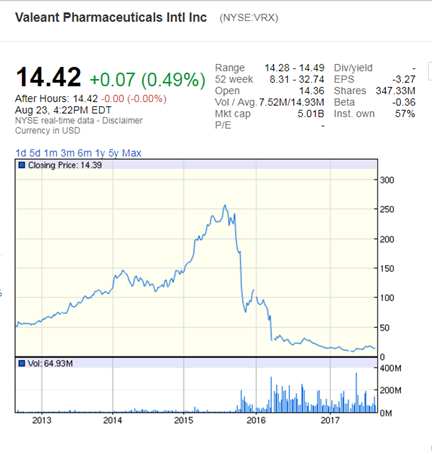 The funny thing is......like Alibaba, Mr. Market loved Enron, Worldcom and Valeant for quite a while too!