Rather than do an in-depth analysis of the earnings call, I'l just refer you to my analysis of the Q2 call "Just when I think....".  The numbers are a bit different but the content and direction is essentially the same.

The company continued to show enormous fake, organic revenue growth (54% YOY).  The market has responded accordingly, up $2.00 yesterday on the whisper numbers and $3.00 on the actual....the Analysts were salivating, using adjectives like "Tremendous", "Great", "Very Strong!"

I also won't take the time to ask how a "law of large numbers business" like Alibaba could:

1.) Increase Revenue by 45% year over year with only a 9% increase in Annual Active Buyers.
2.) Increase Cost of Sales (Excluding SBC) by 6.6% over the September quarter.
3.) Continue to pay $500 Million +/- in dillutive Share Based Compensation (SBC) every quarter, including that which goes to employees of other "ecosystem" businesses.
4.) Continue to "buy" revenue indefinitely, consolidating the likes of Youku Tudou, Lazada and other money-sucking businesses into the pool of sludge.  InTime, another "strategic" acquisition, will most likely be consolidated next quarter.
5.) Increase PP&E US$407 Million in the quarter with no explanation.
6.) Increase Revenue guidance from 48% to 53%, implying continued, gigantic, organic growth.

Even though a discussion of the above would be entertaining.  I'd rather go a different direction today.

Let's discuss the "20 seconds of real magic" in the investor call that merits dissection.....When Eddie Leung of Merrill Lynch finally asked a question I had always hoped someone would ask.  He wanted to know if Alibaba's merchant product mix had changed over time (Minute 29:40 of the call).  For his effort he received a rambling, confusing (at least to me) discussion from Daniel and Maggie about business segments.  Maggie also reminded Eddie and re-emphasized that they still disclose GMV, but will only disclose annually (and apparently also on "Global Shopping Day" with great fan-fare as described in the filing.) To his credit, Joe Tsai recognized the disconnect and stepped in (Minute 33:20 thru 33:40) :

"With regard to the eCommerce segment product mix, the big categories, soft goods, apparel, electronics, FMCG...those categories, the mix has not changed over time."

That's AWESOME!  He didn't mention any of the Wealth Management Products, Bad Debts/Loans, Industrial Products (Pipe/Steel/Fuel Oil, etc.), planes, Yachts, counterfeit liquor or any other of the weird things anyone can find by doing a quick search on any of the Alibaba sites.

Since the IPO, Alibaba has never disclosed product mix.  Other than Daniel's occasional, odd, rambling discussions of "winter coats and cold/warm weather", investors have no idea which product categories and quantities are sold by Alibaba/TaoBao/TMall merchants.  They never have.  Like presidential tax returns, this information is apparently a closely guarded state secret.

Now, per Joe Tsai, we do know with certainty, that the mix has stayed the same, yet, the actual GMV breakdown has never been disclosed.  You'd think, since Alibaba is a super-duper-high-tech-big-data-cloud-computing-giant, they could just push a button and generate detailed and summary GMV data by SKU, vendor, region, product class/category, etc.  Yet, to date, they've not done so.  The only discussion of product mix I know of appears in the initial IPO filing: 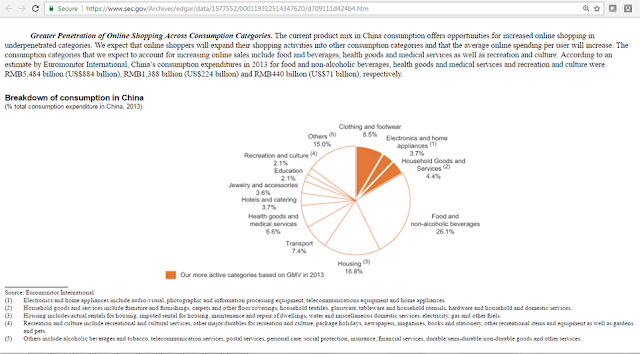 Per Joe, there has been no change in product mix.  Therefore, almost all of Alibaba's GMV is still comprised of Clothing, Footwear, Electronics, Home Appliances, Household Goods and Services.

So presumably, based on a simple extrapolation, in a few months Maggie, Daniel and Joe will report a GMV number somewhere north of US$650 Billion.  Alibaba's GMV will have grown from a gigantic figure, $296 Billion (52.3% of all Clothing, Footwear, Electronics, Home Appliances, Household Goods and Services), just three years ago, to significantly more than all of the on-line sales in China as reported by the NBS.

Clearly something is amiss.  The above, of course, isn't possible.

I'm beginning to believe that Joe, Maggie and Daniel are, as we say in finance, "just making this shit up".  It's as though a few weeks before the quarterly call, they sit down with an Excel spreadsheet, plug in the last quarters numbers and do some "what-ifs" as to what they think the investors might like to hear.  They come up with a script, muted only by what they think they can get away with, and put on their quarterly show.

Obviously, if they disclosed detailed category mix data, it would be a relatively simple exercise to survey a statistically appropriate number of merchants and consumers, determine exactly what they are selling/buying, compare it to management's published figures/ratios and calculate, with great accuracy, the precise level of bull-shit being pedaled by these folks.


The SEC to the Rescue

As I mentioned a month ago in my post "Holiday wishes from a born again Investment Banker...." our new administration was about to appoint "the worst SEC Chairman in history", without my knowing anything about who was destined to be appointed.  It's not that I had anything against the unknown appointee at the time, my point was that the new chair, by default, would be the equivalent of a "goat trotting clueless into a mine field".  I have to say, now that the goat has been selected and the appointment has been made public, my expectations have been exceeded by a country mile.  The only thing you need to know about Jay Clayton, the new SEC Chair, is that he was one of the architects involved in the Alibaba IPO.  Moreover, not only has he never been a regulator, but he's spent his entire career representing the folks that he will now be regulating.  As I mentioned in my post (before I knew who the new Chair would be), Mr. Clayton will be the perfect "laissez-faire, less-government, figurehead who will spend his/her tenure making a few speeches, hobnobbing with corporate royalty and playing golf."  Yup....we picked the right guy.

That said, I'd guess that the Alibaba and Yahoo! SEC investigations will be quietly closed without fanfare in the relatively near future.

Finally, I for one have to say that I'm absolutely thrilled that the SEC is finally going to stop bothering executives and management with these pesky investigations and let businesses finally get back to the task at hand.  Business people need to concentrate on the big, important things, like generating jobs for the "little people", creating shareholder value and of course, enormous insider wealth. The type of wasteful, time consuming administrative folly that the SEC has been engaged in must come to an end.  It stops here and it stops today.

Like, for example a few years back, I recall how a now bankrupt, goofy Hotel & Casino group had tried to goose earnings by writing up the leasehold improvements of a failed coffee shop....could you imagine!.....and the SEC was all over them!....what a pain.  How's a guy supposed to make a buck? Here's the link to the hilarious, time-wasting investigation and "cease & desist" order.  I'm glad to know that, for the sake of the American people, that we can finally put this type of government harassment and injustice behind us.

With Mr. Clayton's appointment, Management will finally be able to put whatever numbers they'd like on filings without repercussion.  Executives can focus on improving their financial statements, making unverifiable claims and working naive shareholders into a frenzy with their impossible business models that have virtually no chance to succeed.  They'll be free to discover new fake revenue sources, nonsensical metrics-du jour and sprinkle misrepresentations anywhere they choose, like seeds upon the fruited plains.   To paraphrase Masa Son....the SEC will be "spreading happiness" all over the globe.

Eventually, it will be impossible to tell whether Joe, Maggie and Daniel are committing Securities Fraud or just presenting "Alternative Facts" to keep their investors enthusiastic about the business.

.....and apparently, nobody will care.