I don't know James Cordier and had never heard of him before last week. He's the CEO of OptionSellers.com. It appears that he somehow lost somewhere between $70 million and $150 million of his client's money (290 high net worth investors) last week.  His website has gone dark.....his mea culpa video (below) is heartfelt, sad, disturbing and unfortunately, darkly comedic.

I'm sure Jim's a really nice guy, but like so many money managers, I'd suspect he got caught up in at least some level of success, with the resulting sense of infallibility and hubris, most likely causing him to double down on his "I know I can't be wrong" bets with other people's money.  For today's Money Managers, being absolutely right ten years from now is the equivalent of being dead wrong for a decade.

I particularly enjoyed the personal apologies to his clients, friends and "family" along with his emphasis on how hard he had worked to "keep the boat from capsizing from the rogue wave" that consumed him.  He recalled "walleye fishing on Lake Erie", regretted that he couldn't take the same clients "Bass fishing", thanked his Kansas City investors for the great barbecue sauce, owed another client a "Cuban sandwich" (probably not adequate compensation) and regretted not being able to join his French clients in Marseilles on the Riviera (presumably because the court is going to pull his passport).  His relating of how he was so consumed with protecting his client's money that he would "pour a glass of red wine" and trade right through dinner was also touching.

I also liked the reference to his father, steering an "800 footer" on the Great Lakes and that he was unable to navigate that darned "rogue wave" that "capsized our boat".

There are lots of great salesman masquerading as a strategists/experts out there right now.....I'd guess that this is the first (and perhaps most interesting) of what I believe will be a tsunami of collapses and odd video apologies coming from money managers whose salesmanship skills by far exceeded their ability to actually manage money.  You should probably view this clip as soon as possible as I'd guess his lawyers will probably have him pull it soon.

Jim, if you are reading this, and you really are sincere about your repentance, I'm hoping you have a loving family and support system behind you.  You'll recover from this and hopefully, at some point, find solace in a new career that makes better use of your salesmanship skills and far less of your decision making prowess.  If by some chance you aren't sincere, and you've already gutted the company, as is most often the way these things go, wiring what's left of your client's money into personal off shore life boats, I'm sure that will come out in the investigation(s) and well.....never mind what I said about that loving family and support system.  You won't be seeing them for a while.  In either case, you must be under tremendous stress right now, hopefully, you are making the right choices in consultation with your legal team as you work your way through this mess.  I sincerely wish you all the best.

That said, here's the first solicitation for what I presume will be more that a few recovery law suits.  Chapman/Albin, a Cleveland Ohio law firm apparently thinks there's at least some recovery avenue available against INTL FCStone, Inc. , or they wouldn't have taken this on (lawyers generally don't take cases where there's little/no probability of getting paid).  INTL FCStone, Inc. is OptionSellers.com's clearing broker and in all likelihood Chapman/Albin's recovery effort will be directed to breaches of "due diligence" and "know your customer" violations.  Discovery on these things is always interesting.  The phrase "what the hell were you thinking???" is often uttered under the claimant counsel's breath and a modified version of same is often described in the final settlement.  At least, as far as OptionSeller.com's 290 clients are concerned, they should consider themselves fortunate that there's a possible "deep pockets" involved in this mess.  Most wronged clients aren't always that fortunate.

The Only Reason I'm Writing This...

Let me be clear, in the grand, macro scheme of things, OptionSellers.com is irrelevant (though it doesn't seem like it right now to the 290 clients who lost everything).  The only reason I bring this up is that the complacency, naïveté and refusal to acknowledge the incredible level of risk building in bloated asset prices is everywhere today.  As I've said throughout this blog, the risk inherent in global markets today is unprecedented.  Of course, there are lots of great money managers out there who are fully capable of navigating past "rogue waves".  But there are also far too many likable Jim Cordier's and "OptionSellers.com's" out there who just don't "get it".

OptionSellers.com is a sobering illustration of what can happen to the money of hard working people, literally overnight, when they put their money in the wrong hands.

James Cordier Describing how Commodities can be used as valuable diversification strategy.
https://www.smarteranalyst.com/bloggers-corner/commodities-prove-valuable-diversifiers-amid-stock-chaos-kellogg-company-k-philip-morris-international-inc-pm/ 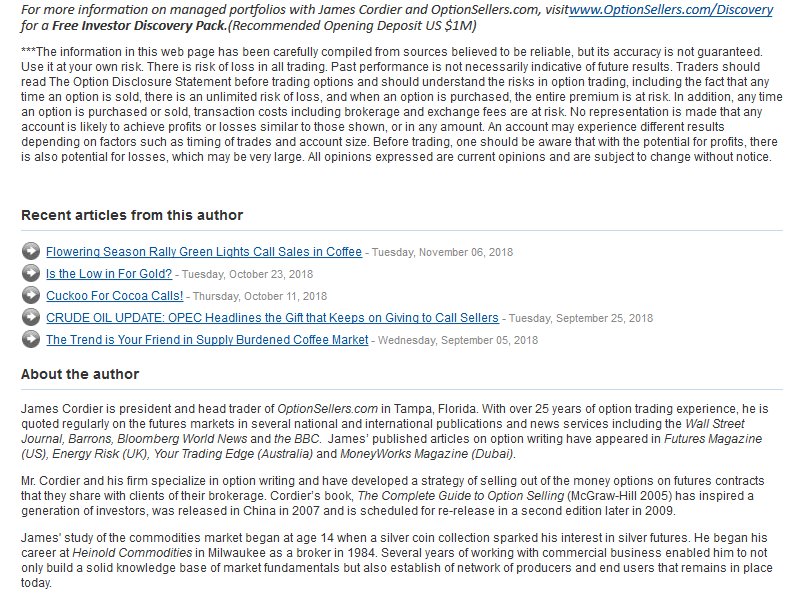